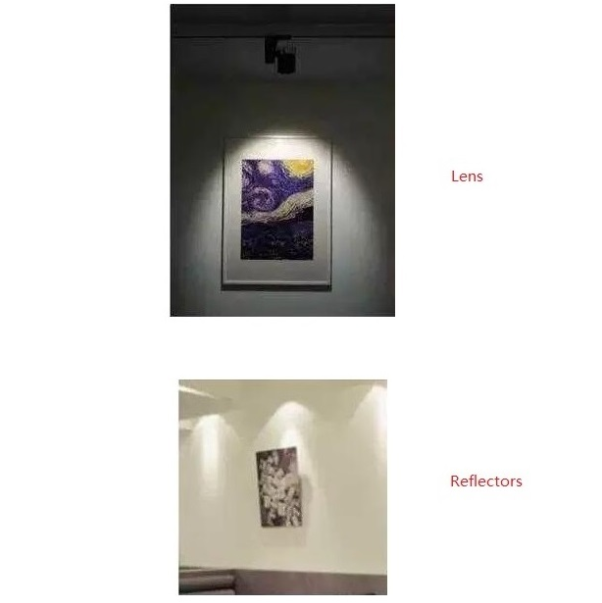 What is a reflector and what is a lens? This problem has puzzled me a long time ago. I believe many people, like I used to, think that the reflector and the lens are actually very similar, but they are not the same in structure, and they are still the same when using.So there are not many people to go deep into this issue.

As we all know, reflectors and lenses belong to the secondary optics, the role of secondary light distribution of light, they can be said to be the core of the efficacy of lighting, if there is no such core application, then the lighting market is about to return to the original The stage is full of fluorescent tubes. Since it is said to use, let us first understand the difference between the reflector and the lens.

The effect of the lens is relatively perfect, generally there is no sub-light spot, the light shape is relatively beautiful; and the effect of the reflector cup comes with the secondary light spot, and the light shape has a layered effect. I believe that a friend with a normal aesthetic view will feel that the effect of the above chart is more suitable for displaying the artistry of the paintings. However, having a sub-spot is a bit unsatisfying, and it can even be said to be awkward, but this means that the reflector with sub-bright spots has no Use it? That’s not.

For a scene, it is still a reflector, still a secondary spot, but when the secondary spot effect is fully highlighted, in fact, its aesthetics is not a grade to speak of before, so in the end is the choice of lens or Reflector cup as a secondary light distribution element this problem, almost with the so-called boyfriend asked her girlfriend and his girlfriend out of the water, in the end to save the eternity of the problem.

This is also a problem that puts the cart before the horse. First of all, for developers, you need to figure out where your needs are, where they are used, and what kind of lighting effects they need to achieve. Then it is the further implementation process and the implementation of the plan.

Or the phrase that can achieve the effect is what you need is also the optical component that you feel is the best. They are not good or bad.

The next step is to recommend suitable lighting fixtures and lenses for everyone (in the absence of optical requirements).

Lamps like downlights are generally installed on the walls of corridors. They are also one of the lamps that are closest to the eyes of people. If the light of the lamps is relatively strong, it is easy for people to show psychological and physiological incompatibility. Class design, in the absence of special requirements, the general use of the reflector effect will be better relative to the lens, after all, there is an excess of secondary spots, will not let people walk in the corridor will feel because a certain point of light is too powerful, leading to Uncomfortable eyes.

Floodlights are generally based on lighting a certain thing, it requires a certain range and light intensity, more importantly, it needs to clearly show the physical exposure in the human field of vision, so this kind of lighting, Also far from people’s eyes, generally do not produce uncomfortable lamps, when designing, the use of lenses will be better than reflective cups. If it is done in the case of a single light source, the effect of pinching the Phil lens is better, after all, The range is not comparable to ordinary optics.

Wall washers are generally used to illuminate walls. They have many internal light sources. If reflectors with strong secondary spots are used, they can easily cause people to adapt to them. Therefore, they are similar to those used for wall washers. The lens is better than the reflector.

This is really a product that is difficult to choose. First of all, it is important to understand the locations of factories, highway toll stations, large shopping malls and other large-scale areas where there are many applications, such as height, Width is very easy to interfere with the application of the lamp, then the mining lamp how to choose a lens or reflector it?

What is high bay light fixture?

Is Ra=100 really the best color rendering?
Scroll to top