Various plants survive in a unique geographical environment, including sunlight, temperature, altitude and soil. They have formed a unique flowering and breeding response strategy in the evolution of the natural environment of hundreds of millions of years, which is to limit the flowering season to a suitable The period to ensure that the offspring can grow and develop smoothly, this is the photoperiod of plants. Most plants gradually adapt to the rhythm of the natural light environment during the natural selection and evolution process, forming a distinct seasonality of optimal reproduction. Studies have shown that photoperiod is an important environmental factor for inducing plant flowering, summarizing and analyzing the regularity of plant breeding performance, in order to improve the output efficiency of facility agriculture and promote the healthy development of agricultural planting industry.

The photoperiod is an important inducer of plant flowering. This paper summarizes the specific application of photoperiod in flowering of plants through the analysis of plant photoperiod physiological pathways, and points out that other environmental factors should be considered in the application, which provides useful ideas for the efficient development of plant agriculture flower planting industry. It also provides a scientific basis for LED manufacturers to produce plant growth lamps and control design. 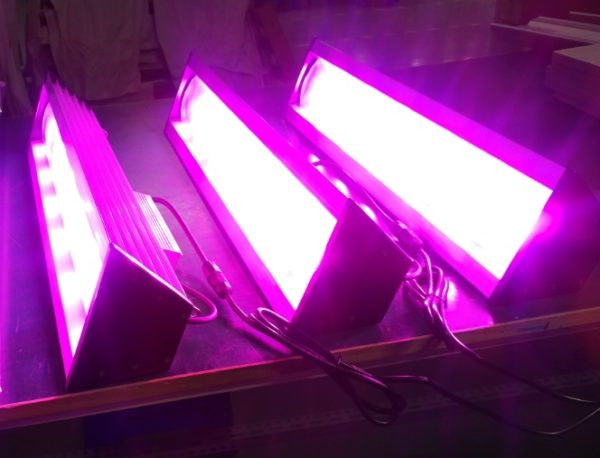 Plant leaves sense photoperiod signals that conduct this flowering stimuli to the growth point of the stem tip. Photosensitive pigments and cryptochromes participate in this pathway as photoreceptors, and the flowering organs are controlled by gene expression to complete flowering control. Higher plants have at least three types of photoreceptors: sensitizing pigments that sense red and far-red light, and cryptochromes and photosensitizers that absorb ultraviolet (UV-A) and blue light.

The transition from simple vegetative growth to nutrient and reproductive growth is a major turning point in plant life, and its importance is the continuation of the plant species itself. In 1920, W. W. Garner and H. A. Allard proposed the concept that the plant itself can measure the length of sunshine and can sense the season according to it, which is now called the photoperiod phenomenon.

In a certain developmental period, plants can be divided into long-day plants (abbreviated as LDP), short-day plants (short-day plants, abbreviated as SDP), and Japanese-negative plants according to the type of response to the length of sunshine. Day-neutralplant, abbreviated as DNP). LDP is a plant that must be lighted longer than a certain number of hours per day and can bloom after a certain number of days. Such as winter wheat, barley, rapeseed, fairy, sweet-scented osmanthus and sugar beet, etc., and the longer the illumination time, the earlier the flowering. SDP is a plant that must bloom for less than a certain number of hours per day. If the light is properly shortened, it can be flowered in advance, but if the light is extended, it will delay flowering or flowering. Such as rice, cotton, soybeans, tobacco, begonia, chrysanthemum, morning glory and cocklebur. DNP refers to plants that can bloom under any sunshine conditions, such as tomatoes, cucumbers, rose and Clivia.

Key issues in the application of plant flowering photoperiod regulation

The critical day length of a plant refers to the longest sunshine that can be tolerated by short-day plant flowering during the day and night cycle or the shortest sunshine necessary to induce flowering of long-day plants. For LDP, the daily length is greater than the critical day length, and even 24 hours can be flowered. However, for SDP, the length of day must be less than the critical length to bloom, but too short to bloom. The Institute of Semiconductors of the Chinese Academy of Sciences and Baoding Dazheng Company should fully consider the chrysanthemum as the SDP factor in the edible chrysanthemum supplement project of Beijing Huitian Agricultural Cooperative.

Knowing the key types of plant flowering and photoperiod response, you can extend or shorten the length of sunshine in the greenhouse, control the flowering period, and solve the problem of no flowering. Artificial extension of light can accelerate the flowering of long-day plants, and appropriately shorten the light, which can promote the flowering of short-day plants early. If you want to delay flowering or not flowering, you can reverse the operation. If the long-day plant is cultivated in the tropics, it will not bloom due to insufficient light. Similarly, the cultivation of short-day plants in the temperate zone and the cold zone will not bloom due to the long time of illumination.

Photofrin mainly receives red (Pr) and far red (Pfr) signals, affecting plant flowering induction. The flowering effect is not determined by the absolute amount of Pr and Pfr, but by the Pfr/Pr ratio. SDP is flowered at a lower Pfr/Pr ratio, while the formation of LDP flower stimulating substances requires a relatively high Pfr/Pr ratio. If the dark period is interrupted by red light, the ratio of Pfr/Pr is increased, which suppresses SDP flowering. The requirement of LDP for Pfr/Pr ratio is not as strict as SDP, but long enough illumination time, relatively high irradiance and far red light illumination are essential for inducing LDP flowering.

The process of inducing plant flowering at low temperature is called vernalization. Vernalization plays an important role in flower induction as well as photoperiod. After germination of seeds or low temperature treatment of plants, the content of gibberellin in the body increases, which is a comprehensive consideration when using photoperiod to treat flowers.

In the photoperiod phenomenon, in addition to the dominant factor, other environmental factors such as temperature also affect the flowering induction of plants. Lowering the night temperature allows the LDP to induce flowering under shorter sunlight, while allowing the SDP to bloom under longer sunlight. For example, beets usually bloom under long days of sunshine, but at a low night temperature of 10 to 18 ° C, 8 hours of sunshine can also form flowers. The morning glory is short-lived at 21 to 23 ° C, but at 13 ° C low temperature. It is characterized by long-term nature.

When a certain physiological age is reached, the plant is treated with a suitable photoperiod of sufficient number of days, and even after an unfavorable photoperiod, the stimulating effect can be maintained and flowered.

The relationship between geographical environment and photoperiod

Most of the short-day plants are tropical and subtropical with short sunshine hours, and most of the long-day plants are native to temperate and cold zones. China is located in the northern hemisphere, and most of the areas belong to the mid-latitudes. In the mid-latitude region, spring has long-day conditions and autumn has short-day conditions, so both LDP and SDP are distributed, and the length of sunshine varies seasonally in different latitudes.

The photoperiod control is a dark state of light illumination within a day, and can be manually and automatically changed. The LED control technology has been controlled by the initial single constant current, and has been developed to the current thyristor dimming, PWM dimming, DMX512, DALI, ZigBee and other protocol dimming. The control mode has also evolved from the earliest line control technology to IR, FR, Wi-Fi short-range wireless control. The controller adopts an embedded structure, which can monitor the optical parameters in real time, communicate data with the remote server through the Internet, and the system can easily realize the shading time control.

Photoperiod control has the characteristics of environmental safety, low cost of LED grow lights and labor saving, and is easy to operate under agricultural facilities. Therefore, rational and effective use of the photoperiod can break the seasonal restrictions of factory-cultivated plants within a certain limit, and achieve anti-seasonal stimulation or inhibition, in order to achieve the purpose of efficient production of agricultural products. With the continuous development of science and technology, the understanding of the phenomenon of photoperiod will inevitably become more profound. The application of photoperiod-regulating plant flowering and breeding to the factory-based breeding industry will promote the steady and rapid development of facility agriculture and LED grow lighting application industry.